Having been contacted again recently by people who are implementing the Moodle Dailies concept and the Coffeecourses concept at their own institutions, I’ve been reflecting on both the excellence of the internet and the depressing ironies of institutional politics, as well as the concept of ‘impact’. Since both projects are at least 5 years old now and not currently active in my neck of the woods I thought I’d tack the word ‘retrospective’ on this post and waffle self-indulgently for a bit.

The Internet – 5/5 would use again

These two projects I think were good examples of how organic online networks can really get shit done and make things become things. For both I ruminated on my design processes out loud on here and input from peers, primarily Twitter peeps, helped me refine the design into their eventual final forms. Then it was Twitter (probably also Google+ a bit, back in the day, anyone remember that? Good times) who started disseminating my work, putting me in touch with a bunch of interested people who wanted to take what I’d done and run with it. Yay for the internet. Boo for institutional policies that try to shut that down because branding and control issues.

Impact – She Tweeted A Thing And You Won’t Believe What Happened Next!

So there’s impact and there’s impact. One is a factor and measured via citations, and the other is people actually visibly benefitting directly from your work. I care about the wrong one of these to ever get much of anywhere in academia. I’ve never published a thing on the Moodle Dailies and I’ve only ever written one conference paper on Coffeecourses. Doesn’t count for a damn thing in the real world except one lousy E1. But here’s what actually happened:

The Moodle Dailies – at least 5 institutions that I’m aware of, not all higher ed, definitely not all in Australia (my recent chats have been with a university in Belgium), implemented courses based on or conceptually similar to the Dailies. I consulted with the DET (or whatever it’s called these days) on developing PD for teachers based on the concept.

Coffeecourses – At least 4 different institutions in Aus/NZ (Deakin, Waikato, ANU, USQ) implemented their own Coffeecourses. Two that I’m aware of are currently active, and ANU’s seems to have been going successfully for quite a while now. And while mine were running, I had all sorts of people from around the world participate and people in other sectors (primarily K12 but also VET and industry) took the courses and seemed to get something out of it.

Plus I did a bunch of masterclasses and presentations and blog posts and things so quite a few other people heard or read me bang on about them. Several other people contacted me independently to chat about the concepts. All of which was far more visible and meaningful to me than locking stuff up in a journal somewhere just to get the institutionally quantifiable kudos.

Institutional Politics – 0/5 would not recommend

The great irony of all of this, of course, is that both projects got barely any traction or recognition in my own institution. Exactly zero people ever did the Moodle Dailies here. Zero. People did sign up for Coffeecourses internally, because for a little while it was part of a requirement for new teaching staff on probation, but I have my suspicions that they mostly just signed up and never actually looked at the content, let alone participated. Then when I got workplace changed out of my former role, all my projects were dropped and no longer run.

I’ve never really decided if this meant the projects were a failure or not. Coffeecourses at least did achieve its aim here for a while, but the Dailies were The Greatest Project That Never Was. Failed utterly at its goal. But does the influence it had on people’s pedagogical thinking mean they were successes? How much resentment should I bother harbouring that they basically had no value within my own institution?

Here endeth the retrospective rumination. In terms of future stuff it would probably be interesting one day to curate all the different iterations of things into one place and map the progression of an idea, and I keep promising my PhD supervisors I’ll eventually write something on the Moodle Dailies. Also I never know how to end these things so here’s a cat: 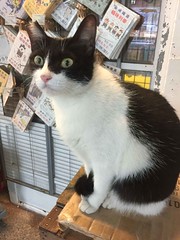